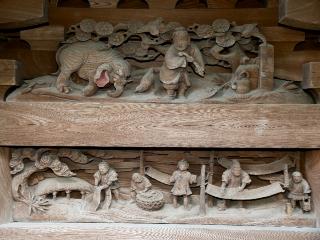 It was founded during the Oei period （1394〜1428） as the village shrine of Shimofusa Province and its shrine pavilion was built in Sagishiro. Thereafter, it was moved to the present place during the Kan'ei period （1624〜1644）, where the main shrine was built in 1866 during the Keio period.
The wooden carvings on the wall around the main shrine that portrays labor at an indigo dyeing is one of the works of Hasegawa Takejiro. It is considered as a valuable ethnic material and as a cultural property designated by the city.